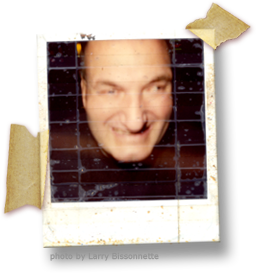 Larry Bissonnette is a disability rights advocate and artist who lives in Williston, Vermont. He has been painting and drawing since he was a young child and exhibits his art regularly both locally and nationally. His work has been most recently featured at the Amy Tarrant Gallery at the Flynn Center for Performing Arts in Burlington, Vermont in a solo exhibition in 2015 entitled, “Looking Out: The Self-Taught Art of Larry Bissonnette”, a 2016 group exhibition entitled “Amazing GRACE (Grassroots Arts and Community Effort) – Celebrating 40 Years of Artmaking” and in a 2017 group exhibition at Lesley University entitled “3 Artists Celebrating Autism”. In the 2016 South End Art Hop, he was awarded second prize in the juried artist show.

In 1991, Larry learned to communicate through typing and began combining words with his art to express his thoughts and ideas. Over the past 20 years, he has been a featured presenter at many national educational conferences and has written and spoken on the topics of autism, communication and art. He is also both the subject and writer of an award winning film about his art and life, called, “My Classic Life as an Artist: A Portrait of Larry Bissonnette” (2005) and starred in a feature length documentary directed by Gerardine Wurzburg about adults with autism called “Wretches and Jabberers” (2010).

Larry Bissonnette's services are coordinated by the HowardCenter, one of the largest community mental health agencies in the state of Vermont. It provides developmental, mental health, substance abuse, and child, youth, and family services in the Chittenden County area. Its developmental services division provides a variety of services to 600 children and adults with developmental disabilities. The services include residential and housing supports, employment, case management, family support, community integration and post-secondary education.